In January 2013, I started taking online art classes.  The first class I took was called, “The Year of the Giraffe” and was taught by the creative, Carla Sonheim.  To read more about Carla and her online classes, check out her blog:

As you can imagine, I have LOTS of giraffe art!

Each month we had a new assignment – we drew, painted, collaged, sewed and even wrote poetry! 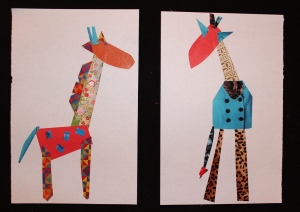 I  also learned a ton about giraffes.   Did you know that the birds that sit on  giraffes are called a Redbilled Oxpecker or Tickbird? 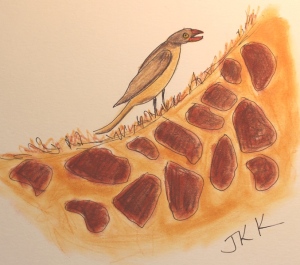 They also have a cousin, called a Yellowbilled Oxpecker.  The Oxpeckers name is derived from their feeding habits.  This bird perches on large mammals – wild and domestic and eat parasites such as ticks and botfly larvae which lodge in the mammal’s skin.

Redbilled use a scissoring motion to search through the hair of their hosts so are often seen on giraffes; whereas, Yellowbilled use a pecking motion so they tend to favor short-haired animals such as buffalo and rhino.

I have more giraffe art to show you but I will save it for another day!

13 responses to “The Redbilled Oxpecker”