I like to collect old postcards as I find them good material for my art collages.  I happened upon these “Tall-Tale” postcards on one of my art “fishing” expeditions:

According to the Wisconsin Historical Society (www.wisconsinhistory.org), “Tall-tale postcards emerged around the turn of the 20th century, when postcards came to function as surrogates for travel. People soon realized that postcards could be used to create or sustain a certain utopian myth about a town or region, and crafty photographers began to physically manipulate their photographs. Nowhere did these modified images, or “tall-tale postcards” as they came to be called, become more prevalent than in rural communities that hoped to forge an identity as places of agricultural abundance to encourage settlement and growth. Food sources specific to the region — vegetables, fruits, or fish — were the most common subjects.”

With the added bonus of handwritten notes on the back of the cards:

These postcards inspired me to revisit my Alphabet Art Journal and create my own “Tall-Tale” for the letter, “F.”

Wishing all fathers a “swell” Father’s Day and that’s no exaggeration! 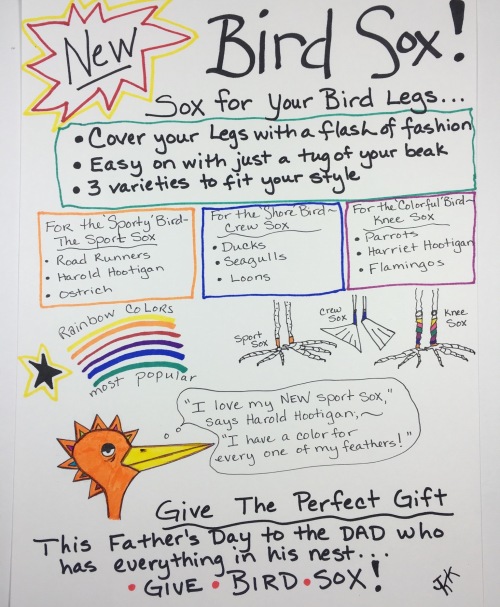 Don’t be out on a limb without your bird sox!  Lol!

I hope you have a happy day, whatever socks you like to wear!  🙂