Spring!!  Can you hear the earth sing?!

And my lilies can hardly wait for more sunshine so they can stretch out tender stems from a long, cold winter…

Rhubarb is seriously stunning in color and texture, wouldn’t you agree?  I can almost taste the Strawberry-Rhubarb Crisp!  Yum! 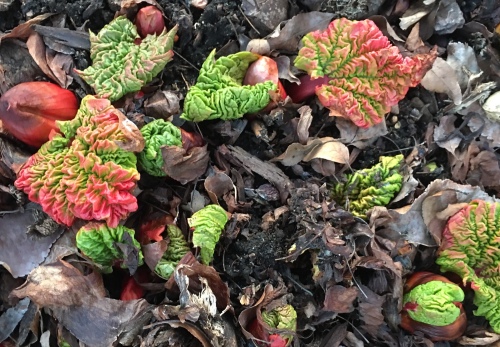 And what about this shiny green moss?  It seems to have found a place to grow between these walkway stones!

Be sure to check out Ali’s blog, The Mindful Gardner

I can almost smell each flower’s scent in Ali’s photos and descriptions!  Her passion for gardening is like a sprouting seed after a long cold winter…

My 3 candle experiment today – playing with patterns and color: 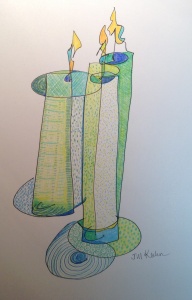 The colors remind me of GREEN or Granny Smith APPLES!

Delicious in an apple pie with a hint of cinnamon and a scoop of  Vanilla Bean ice cream!  Yum!

It has been extremely warm where I live in the Pacific Northwest.  So I have been hanging out a lot in the shade with my Hostas:

According to Wikipedia,  Hostas are herbaceous perennial plants, growing from rhizomes or stolons,[10] with broad lanceolate or ovate leaves varying widely in size by species from 1–18 in (3–45 cm) long and 0.75–12 in (2–30 cm) broad.

Their striking foliage can provide a focal point in the garden. Though Hosta plantaginea originates in China, most of the species that provide the modern plants were introduced from Japan to Europe by Philipp Franz von Siebold in the mid-19th century. 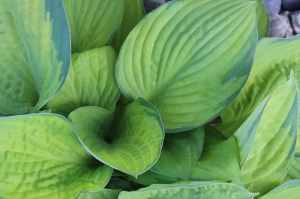 There may be as many as 45 species and 3000 cultivars of Hostas!

Hostas are eaten by deer, rabbits, voles, slugs and snails, which can cause extensive damage.  Can you find the leaf above that has a large bite in it?

Tomorrow I will post a mixed media abstract I did of a Hosta.  I hope you will join me!